On 1 June, Professor Burkhard Freitag was given the 2017 Cross Border Award for his outstanding contributions to partnerships between the University of Passau and other universities in the neighbouring regions of Austria, the Czech Republic and Germany. Every year, this award is presented to persons, businesses or academic organisations who successfully collaborate across the national borders in the region; it is a joint initiative of the chambers of commerce for Lower Bavaria, Upper Austria and Southern Bohemia. 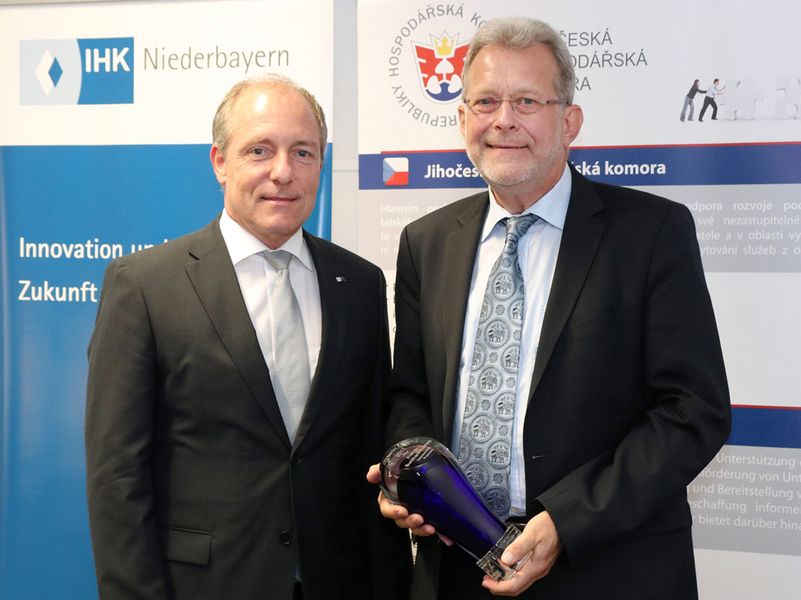 The award is intended to promote closer integration of Lower Bavaria, Upper Austria and Southern Bohemia to form a common economic area and strengthen exchange across the borders. '[Professor Freitag] is presented with the Cross Border Award for his longstanding work, initiatives and great personal dedication to promoting the cross-border partnerships of the University of Passau with universities and higher education institutions in Southern Bohemia and Upper Austria', the President of the Chamber of Industry and Commerce for Lower Bavaria, Thomas Leebmann, said. In his laudatory speech, Mr Leebmann cited the Technology Transfer Centre for Southern Bohemia and Lower Bavaria and the Knowledge Platform for the Danube-Vltava European Region as examples and emphasised the significance of Professor Freitag's impulses in the all-important field of digitalisation for technological transfer in the economic region of Lower Bavaria and cross-border co-operation. He also made mention of the East-Bavarian Internet and Digitalisation Network (INDIGO), which has been instrumental in strengthening co-operation among neighbouring higher education institutions.

The President of the University of Passau, Professor Carola Jungwirth, said: 'Research and knowledge transfer are among the core competencies of a university. In both these areas, Burkhard Freitag has shown himself to be one of the outstanding actors from our University, which sets great store by the dialogue between academia and society as it uses its guiding theme of Networked Society, Digitalisation and (Internet) Cultures for co-operative partnerships across all borders. I would like to extend my heartfelt congratulations to my colleague Professor Freitag for the recognition of his substantial contributions to the cross-border regional integration of our university.'

A professor of computer science since 1994, Burkhard Freitag has held the Chair of Information Management of the University of Passau since 2002. Prior to this, he studied Mathematics at the University of Münster, earning his Diplom degree in 1980, followed by a doctorate at TUM in Munich, which he completed in 1991. Before taking the academic career path, Professor Freitag worked for research institutes and IT companies for a number of years. Professor Freitag's research interests include databases, information systems and information management.

From 2006 to 2012, Professor Freitag was the University of Passau's Vice President for Research and Technology Transfer, and served as President of the University from 2012 to 2016. He was one of the driving forces behind the Technik Plus development strategy of the University of Passau. Since October 2013, Professor Freitag has sat on the university council of Landshut University of Applied Sciences. Since July 2014, he has been a member of the advisory board for the Bayern Digital initiative of the Bavarian Ministry of Economic Affairs and Media, Energy and Technology. In February 2017, he was appointed Spokesperson for the platform ‘Education, Science and Culture’ of the Center Digitisation.Bavaria (CD.B).